By Second Spring4 February 2019November 20th, 2020All Posts
No Comments

Dr Lamb, you came on the first Thomas More College/Second Spring Oxford Summer School, back in 2008. Can you describe what it was like? The Second Spring Summer School was in its pilot year when I attended it. I had just finished my BA in Humanities and Literature at the Thomas More College of Liberal Arts and was preparing to begin my Masters in English Literature back home in Canada at the University of Western Ontario. The program was nothing short of transformative: it opened up to me an in-depth examination of the Catholic faith in the Victorian period, an examination that went beyond cliched and generic discussions, showing—with rigour and range—how Catholicism and the Christian intellectual tradition, especially medieval art and culture, influenced the development of the arts, in a variety of forms (from painting through to architecture, poetry and the novel), throughout the nineteenth century and well into the twentieth. This encounter with the pivotal roles that figures such as Newman, Hopkins, Waugh, Tolkien and others played in the development of literary and aesthetic culture in the modern period, broadly speaking, ended up profoundly influencing the direction of my doctoral work. To this day, it continues to inform my work as an academic specialising in Victorian and Modernist poetry, art, and the intersection between theological concerns and aesthetic forms. In addition to the intellectual formation, the Summer School provided me with the opportunity to see what a holistic education might look like. The leaders of the programme (Stratford and Léonie Caldecott) had not only thought deeply about the relationship between theology, the arts, and culture: they clearly lived out an engaged relationship with the very cultural currents they studied. The Summer School was memorable for the lectures, but also for its opportunities for prayer, conversation, and interactions with various key sites related to our studies: Stonor Manor (frequented by St Edmund Campion), C.S. Lewis’s home the Kilns, the Oxford Oratory, Littlemore, White Horse Hill, and the list continues. To this day, I have lasting friendships with those who participated in, and who taught, this programme. So it’s a great privilege to contribute to the programme’s development this summer.

Did the Summer School in any way influence the direction you took later in your graduate studies or academic career? What I studied at the Summer School profoundly influenced the direction of my graduate studies and, eventually, my doctorate. Now, it continues to do so in my academic career. For instance, my first book centres on the influence of Pre-Raphaelite and Catholic aesthetics on emerging modern concepts of value in everyday life. In particular, I look at how Victorian medieval revivalisms served as redressive resources for concerns regarding secularism and affects of discontent, like boredom, that were distinctly on the rise (for a host of reasons) throughout the nineteenth century and into the twentieth. The ideas for this project emerged, in part, from ideas that began percolating during my time in Oxford back in 2008. The Summer School has also greatly shaped the way in which I organise and develop my teaching and program of research to this day, here at the University of St Andrews. I’m keen to impart to my students that the questions of perennial significance grow out of our shared concerns about existence, the purpose of life, and the role that Christianity has played in informing these concerns. For example, I’m co-developing a proposed undergraduate module here at St Andrews that examines how the imagination plays a vital role in informing our most pressing questions about culture, religion’s role within it, and the relationship between science and faith as modes of knowledge. Our proposed readings range from Aeschylus’ Prometheus Unbound to scholarship on New Physics, with Augustine, Dante, Mary Shelley’s Frankenstein, Christopher Nolan’s Interstellar and other works in between. The kind of scope and range of this module’s approach was found and modelled in an exceptional way in both my undergraduate formation at the Thomas More College of Liberal Arts and at the Second Spring Summer School.

Are there any particular memories of Stratford that you would like to share? I am fortunate to have a fair number of memories of Stratford and his family throughout my time at the Summer School and in subsequent years. There are some impressions I would like to share, that grew out of a series of encounters, and then one specific memory I’d like to mention. First, some impressions (and these are impressions about Strat and Léonie because it’s pretty difficult to talk about one without bringing up the other). I was struck by how Strat and Léonie worked as a team that deeply believed in the resources Second Spring could offer to Catholic culture within the UK and in the anglophone world. Their work grew out of their shared faith and deep care for the way culture grows out of a lived and living relationship with the Christian intellectual and spiritual tradition. This was not only evident in the ways they taught. It infused the whole rhythm of the Summer School. I left the Summer School feeling as though I had made special, personal friendships that would shape me in future years, and they certainly have. Now for a particular memory of Strat. He provided me with my first chance to teach, in a sustained way, some of the more developed research I was working on, in the early period of my graduate studies, back in the summer of 2011. I was participating in a conference in London, and incorporated a short stay in Oxford to visit some friends (the Caldecott’s eldest daughter Tessa among them). It happened to be during the time of the annual Summer School and Strat generously invited me to run a seminar, during which I discussed the relationship between medieval aesthetics and Gerard Manley Hopkins’ poetry. Getting to teach in one of the places Hopkins loved best, in a programme that had meant so much to me, and in collaboration with a scholar I admired greatly was a very special experience and I am so grateful for the way Strat encouraged my academic work as something vocational and avocational.

Do you think that Second Spring, the journal and the Summer School, has a distinctive charism, and if so are you able to define this? Second Spring is engaging with the current culture, both in its own right and in relation to our rich and complicated Catholic intellectual and cultural tradition. It does this in a way that is timely, person-centred, and academically rigorous as well as accessible to people from a variety of backgrounds. This is a rare but absolutely essential approach if we are going to reach out, and attend, to the very pressing, real needs of so many aspects of our culture—be it the need to rediscover the resource that faith is for the arts or the ways in which prayer aides like Magnificat (which Léonie still edits for the UK and Ireland), or journals and websites like Second Spring can help us better incorporate rhythms of prayer into our daily lives. This charism can help us learn and live out our faith with, as Ratzinger once put it, both our heart and our reason “open to God”.

Tell us more about your current post at the University of St Andrews in Scotland and how you got there. As of this summer, I joined the School of Divinity at the University of St Andrews. As Lecturer in Theology and the Arts within the School’s Institute of Theology, Imagination and the Arts (ITIA), I teach undergraduate and postgraduate modules on various intersections between theology and the arts and assist in co-ordinating a variety of initiatives—such as our Institute’s weekly Research Seminar Series, where leading scholars from across the UK and beyond come to share their research on aspects of the growing field of Theology and the Arts. Given ITIA’s status as among the first and premier places in the world for advancing innovative, serious and also public-facing research on interfaces between Theology and the Arts, I had been following the Institute for some time and found its aims and outputs influential on the way I envisioned my own research and teaching trajectories. When the chance came to apply for a Lectureship at ITIA in the Winter of 2018, I applied and was delighted to receive the position shortly thereafter.

What are your current research interests, and what brought you to them? I specialise in the art and writings of the Pre-Raphaelites and their affiliate circles, including Christina Rossetti and fin de siècle authors and artists, such as Walter Pater and Oscar Wilde, as well as their Modernist inheritors, particularly G.K. Chesterton and Evelyn Waugh. I am interested in how theology forms and is informed by art and literature; the phenomenon of the growing rise of boredom and other affects of discontent, from the Victorian period through to today; intersections between liturgical theology and Christian Personalism; and the currents of devotional art and fiction in Canada from the 1920’s to the present, especially as found in the work of Catherine Doherty, William Kurelek, and Michael O’Brien. As briefly mentioned above, I’m finishing a book on the theological and aesthetic implications of boredom throughout the Victorian period and into the early twentieth century. Entitled Suspended in Time: Boredom and Other Discontents in the Pre-Raphaelites and their Circle, the book is planned for release in 2020 with McGill-Queen’s University Press. Among other projects, I am currently contributing to Palgrave’s Encyclopedia of Victorian Women Writers, covering Victorian Anglo-Catholic women’s poetry and prose and this Spring I will be speaking on C.S. Lewis and forms of belief at the McGrath Institute of Church Life’s Lenten Lecture Series at the University of Notre Dame. As time permits, I also occasionally write for The Catholic Herald (UK) and Convivium: Faith in Our Common Life (Ottawa, Canada).

You taught extensively for us in 2014, the year Stratford died, and this year you are overseeing the whole Summer School. Can you describe what teaching means to you? As a teacher I hope to impart to my students how the study and practice of literature and the arts, in dialogue with theology and biblical studies, enables them to more fully engage with what it means to be human, in the world, and called to do worthwhile things with their lives (for both themselves and for others). I think the following points from Stratford’s Beauty in the Word: Rethinking the Foundations of Education, sum up well what teaching means to me. He notes that education, grounded in the “transcendent horizons” available to us, enriches a student’s sense of the “meaning of and purpose of life” and in so doing “releases the floodgates of human creativity” which, in turn, serves as a resource for culture. 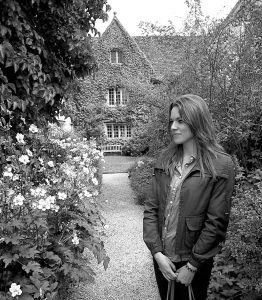 Learn more about Second Spring’s Oxford Summer School here. The programme will next run in 2021—sign up to hear news.