In the Eye of the Storm

St George and the Dragon 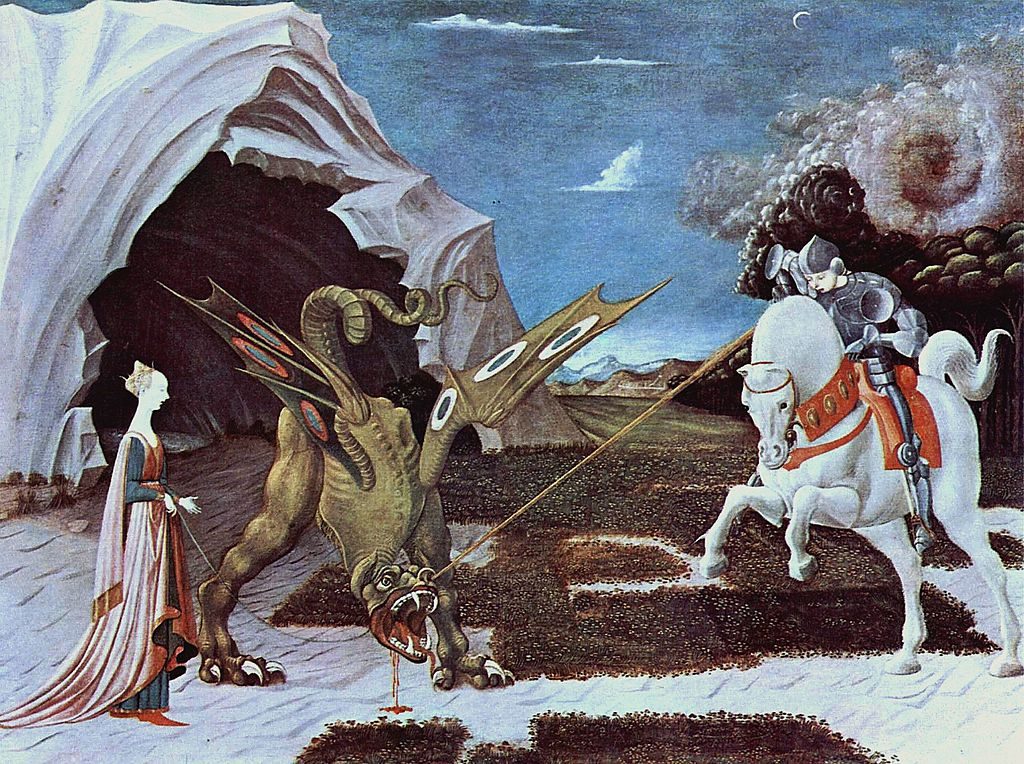 Saint George and the Dragon, painting by Paolo Uccello

The topic couldn’t be more dramatic: a maiden in distress, attacked by a vicious dragon who is defeated by Saint George. Yet, the maiden in Paolo Uccello’s (1397-1475) painting from around 1470 seems anything but scared. Indeed, she might be looking at her pet-dog the way she is viewing the beast. She holds him on a mere leash (her belt, as is claimed) when iron chains would barely hold this monster at bay. She looks as calm as if she were enjoying a morning walk. A bit more drama, one might think, would have served the purpose well. In Tintoretto’s later work, for example, the young woman runs for her life. Yet Uccello’s older Gothic painting style, which he preferred to the newer Classical realism of his contemporaries, allows for the depiction of some profound spiritual truths.

The virgin stands for the soul in a state of grace, fully dependent on God in an act of faith. No powers or dominions, no superior demonic intelligence can harm her, for she depends fully on God. The seemingly flimsy string she holds the dragon with is her faith and trust in God that suffices to keep the dragon at a distance. If she is indeed holding the monster by a belt symbolizing chastity, then her love of God has nourished her to the point that she can tie up the wild dragon of lust. For by putting God first, she can love human beings better. Unlike the disciples during the storm, she is not fearful, since she knows that Christ is present, even when He seems asleep or absent during moments of crisis. She has recognized that with His secret presence in her heart, nothing will harm her. He sends her a warrior to defend her, showing that her faith is indeed all she needs. The knight attacks and wounds the dragon, and forces him into submission while all she has to do is hold him attached to a leash. It appears she had tied the dragon up before the arrival of Saint George. With a motion of her hand, she shows him the beast, whom he can now kill without having to chase him down. Though a slight creature, she managed to get the better of the monster.

Saint George himself does not look like a mighty warrior. He seems very young, and appears as virginal and recollected as the maiden, both seeking their strength in someone greater than themselves. Their youthfulness does not signify naiveté nor inexperience but comes from the timeless youth of God, the eternal source of goodness, who never grows cynical nor desperate in the face of evil. It allows them to face evil squarely, seeing its danger without being overwhelmed by it, knowing that God’s is the final victory. Indeed, the young warrior is charging, carried by the momentum of a courage based on God rather than on false self-assurance.

The lady stands in a beautifully arranged garden, making the dragon’s presence seem incongruous. It is the garden of her soul that she has tended well through a life of prayer. Her posture and face manifest a contemplative spirit. Indeed, she seems immersed in prayer, turned inwards, while this drama is unfolding. Dressed like a lady of standing, a sense of nobility emanates from her, ultimately stemming from her divine spouse for whom she has kept her oil-lamp filled. This aristocratic demeanour doesn’t necessarily come from her background, but from being transformed in Christ, the eternal King through whom we all become kings and queens.

Yet, there is something more here than just the ordered garden. A huge, dark cave looms prominently in the background out of which the dragon presumably came. We all have these abysses in our souls, wounds inflicted upon us that weaken us to the temptation of a false Ersatz of the love we have missed. Money, sex, power, prestige, work, ideologies are the typical ways we try to compensate for this sense of want. When we give in, the dragon grows ever bigger and finishes by swallowing us up—for there will be nothing left to us but our idolatrous worship of these finite goods that have hollowed us out.

The dragon looks scary as a beast of that kind should. A mixture of giant lizard and bat, huge claws and teeth, he appears devilish. If erect, he would tower over the two human figures. But he has been brought to his knees, or almost, by both. Their humility has brought down his pride, and he finds himself helpless—a tower of strength conquered by mere youngsters, just like Goliath felled by David. Divine courage sees prestige for what it is: the pretence that brute force is infinite and eternal while it is neither. Anyway, the strong might kill the body, but not the soul. By standing up to evil and revealing its true nature, the good, whether surviving or not, will have dealt it a deadly blow. For wickedness can’t stand the truth about itself but will combat it tooth and nail. Yet the truth will out.

There will be dragons. The battle is not over. Even this dragon, though wounded, is not dead. He will come back out of the cave, or another one will appear at some point or other. For the time being, the storm seems barely past. The dark, twirling, hurricane-like clouds still seem very close to Saint George’s back. The lady passed through a terrible storm without losing her calm, and seemingly from nowhere, out of the hurricane itself, came Saint George to save her. The worst is past, yet the maiden is, one might say, still in the eye of the storm. The tranquillity will not last.Until her dying breath, the human soul will be subject to storms: the most terrible one might well happen just before she passes from this life and is taken into the arms of the Heavenly Father. But it is not the dragons we need fear, nor the dark caves in which they lurk, but our lack of humble trust in God. If only we desire Him above all else, He will rescue us.

Dr Marie Meaney is an academic and author who has written on topics ranging from Simone Weil to fertility issues. She lives in France with her husband and daughter.

If you enjoy commentaries on Sacred Art, you might enjoy the spiritual companion MAGNIFICAT, which includes monthly art features.